Middle Tamor Hydropower Project (MTHP), is a run-of river (RoR) project with an installed capacity of 73 MW. The headworks (HW) of the project is located in Phungling Municipality and Phaktanglung Rural Municipality and the Powerhouse (PH) is located in Mikwa Khola Rural Municipality at the right bank of the Tamor River in Taplejung district. The boundary co-ordinates of the project are 870 40’ 01” E to 870 42’ 40” E and 270 23’ 29” N to 270 25’ 19” N. The nearest black topped approach road from the project site is at Bahanande, on the Mechi Highway (233 km from Charali in Jhapa), 7 km south of district headquarters Phungling Bazar. From Phungling, the project Powerhouse (Thumba village) and Headworks (Mitlung village) sites are accessible via a 15 km and 17 km long separate earthen roads respectively.

SMTHL has implemented the construction work with four major individual contract packages of work with different international and national contractors. All of the four major contracts packages (Main Civil Contract, Hydro-mechanical Contract, Electro-mechanical Contract and Transmission Line Contract) have already been awarded by the SMTHL. The Main Civil, Hydro-Mechanical, Electro-Mechanical and Transmission Line Contractors have been working at the construction site. Beside above major individual Contract packages, the pre-construction and preparatory works, which comprises various works like construction of access roads, up-gradation of existing roads to be used by the project, slope protection works, Tamor crossing bridge in the PH area in Thumba, camp facilities, acquisition of required private lands as well as leasing of public land, arrangement of construction power line and explosives for the tunnel excavation, arrangement of local construction materials and necessary permission form local authorities have been executed by outsourcing different suppliers and local contractors on need basis by SMTHL.. According to the Power Purchase Agreement (PPA) with Nepal Electricity Authority (NEA) the required commercial operation date (RCOD) of the Project is 17 July 2022 (1 Shrawan 2079) for 73 MW. However, considering initial impact study of COVID-19 on the Project, the RCOD is estimated a delay of 1 year. As per the 3rd PPA amendment signed with Nepal Electricity Authority (NEA) the RCOD of the Project is extended till 16 July 2023 (31 Asadh 2080) for 73MW.

Based on the current Revised Feasibility Study, the installed capacity of the project is 73 MW with the design discharge of 73.71 m3/s, corresponding to 42.71% exceedance flow. The catchment area of the Project is 2,002 km2 and the gross head is 132 m. The 50 m long weir has its crest level at 887 m above mean sea level (amsl). The maximum height of weir crest from its original ground level is 10.5 m which diverts the required flow to the Intake. Two undersluice gates maintain the design water level for intake and flush excessive deposits deposited in front of the intake area. Intake comprises of 6 openings to withdraw the design discharge to the Project. The flow from the Intake is conveyed to the gravel trap and successively towards underground settling basin via a concrete cased approach pipe of about 281.52 m length.

A 100 m long underground settling basin (with additional 50 m of inlet and outlet chamber) designed with 90% trap efficiency passes the clean water into the headrace tunnel. About 3,367 m long headrace tunnel (concrete lining and shotcrete) with excavated diameter of 6.5 m passes the design discharge to the penstock. Proposed penstock is of 4.5 m (internal diameter) till the branching length of about 264.66 m after which four penstock pipes of internal diameter ranging 2.25 m, 3.18 m, 3.9 m and 4.5 m supplies the water to the powerhouse. Powerhouse is 56.5 m long and 26 m wide with the tail water level at 755 m amsl. Four units of vertical axis Francis turbine each of 18.25 MW capacity have been proposed to generate the designed output of 73 MW. After the power generation (non-consumptive use), the tail water is discharged back to the Tamor River via a 75 m long tailrace culvert. The generated electricity is supplied through a 9 km long 220 kV double circuit transmission line (with 24 towers), to Dhunge Sanghu substation of the Koshi Corridor which is being constructed by Nepal Electricity Authority (NEA). The estimated annual energy generation as per the PPA is 429.409 GWh. The general layout of the project is shown in Figure 1. 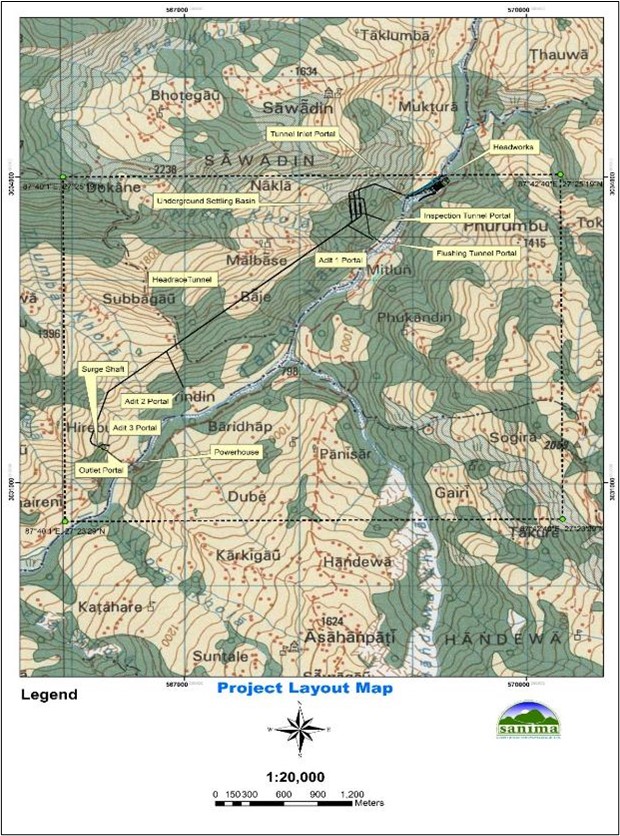