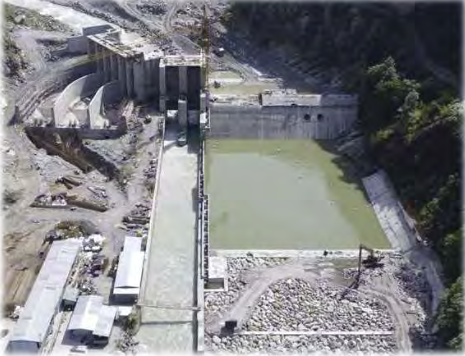 Notice to Shareholders for Time Extension

Middle Tamor Hydropower Project (MTHP), is a run-of river (RoR) project with an installed capacity of 73 MW. The headworks (HW) of the project is located in Phungling Municipality and Phaktanglung Rural Municipality and the Powerhouse (PH) is located in Mikwa Khola Rural Municipality at the right bank of the Tamor River in Taplejung district. The boundary co-ordinates of the project are 870 0 0 0 black topped approach road from the project site is at Bahanande, on the Mechi Highway (233 km from Charali in Jhapa), 7 km south of district headquarters Phungling Bazar. From Phungling, the project Powerhouse (Thumba village) and Headworks (Mitlung village) sites are accessible via a 15 km and 17 km long separate earthen roads respectively.

Sanima Middle Tamor Hydropower Ltd. (SMTHL) was established as a Special Purpose Vehicle (SPV) Company for the implementation and operation of Middle Tamor Hydropower Project (MTHP). The Generation License of the Project was obtained initially for 54 MW on 5 June 2017, and subsequently the design was revised and generation license for revised capacity of 73MW obtained on 10 December 2018. SMTHL has implemented the construction work with four major individual contract packages of work with different international and national contractors. All of the four major contracts packages (Main Civil Contract, Hydro-mechanical Contract, Electro-mechanical Contract and Transmission Line Contract) have already been awarded by the SMTHL.

The Main Civil, Hydro-Mechanical, Electro-Mechanical and Transmission Line Contractors have been working at the construction site. Beside above major individual Contract packages, the pre-construction and preparatory works, which comprises various works like construction of access roads, up-gradation of existing roads to be used by the project, slope protection works, Tamor crossing bridge in the PH area in Thumba, camp facilities, acquisition of required private lands as well as leasing of public land, arrangement of construction power line and explosives for the tunnel excavation, arrangement of local construction materials and necessary permission form local authorities have been executed by outsourcing different suppliers and local contractors on need basis by SMTHL. The progress of all these activities is described in this report. According to the Power Purchase Agreement (PPA) with Nepal Electricity Authority (NEA) the required commercial operation date (RCOD) of the Project is 17 July 2022 (1 Shrawan 2079) for 73 MW. However, considering initial impact study of COVID-19 on the Project, the RCOD is estimated a delay of 1 year. As per the 3rd PPA amendment signed with Nepal Electricity Authority (NEA) the RCOD of the Project is extended till 16 July 2023 (31 Asadh 2080) for 73MW